The elite women once again provided an exciting race across the sand strips of Zonhoven and we also saw a promising return to form for Britain's Nikki Harris. Post-race quotes by Paul Burgoine. Photos: Kristof Ramon 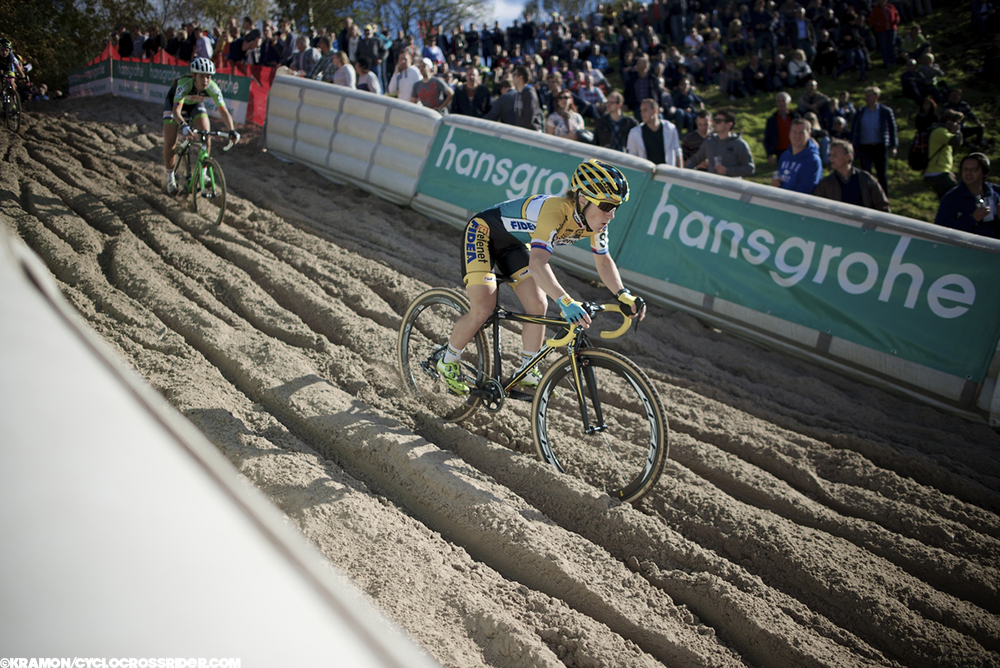 SUNDAY'S Superprestige race in Zonhoven was expected to be another open and competitive race particularly without the two riders at the top of women’s cyclocross: World champion Marianne Vos is yet to start her ‘cross season and World Cup winner Katie Compton was back in the States contesting the first-ever Pan-American Championship.

That left the way open for another exciting race across the heathland and sand strips of Zonhoven. Former British champion Nikki Harris made the first significant move and was chased by Belgian champion Sanne Cant and Ellen Van Loy. Next Sanne Cant went clear only for Harris to catch her again, but on the day the Belgian had the edge and she moved ahead again to win by 12 seconds. It was a pleased Harris who crossed the line in second place though. 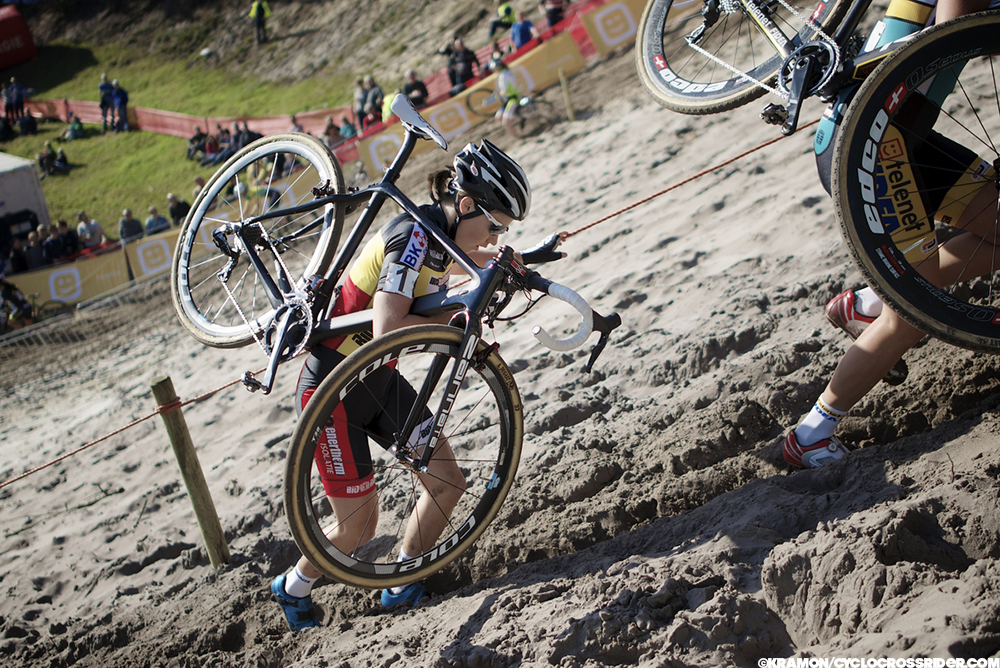 Eventual winner Sanne Cant (above) tracks Nikki Harris on a sand climb. Harris (below) was pleased to be back on the podium in second place. 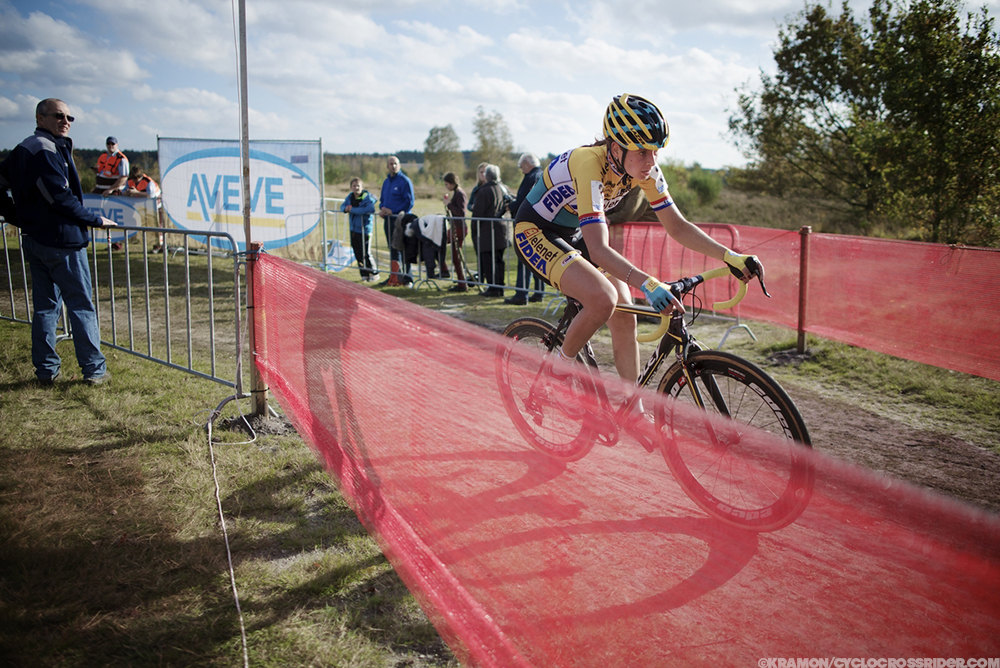 It’s nice to have the ‘old Nikki feeling’ back today...I want to be back on the podium

“I’m completely made up,” Harris told our reporter afterwards, “and it felt like a win for me, it was really close and it’s nice to have the ‘old Nikki feeling’ back today. I’ve been training really hard the last month and I kept thinking when am I going to start benefitting. Yesterday I wasn’t really where I wanted to be (fifth in Koppenbergcross), I want to be back on the podium and today I just came in a bit more relaxed.”

“I felt really strong and back where I want to be,” Nikki added. “It’s a heavy course and you have to really concentrate on each section. I’m aware that Sanne (Cant) is really good in sand and she was gapping me a bit on sections, but I started to get more confident and I could ride them as well, but I was just a bit dead at the end.”

Helen Wyman had another incident-affected race – after crashing in the Koppenbergcross – getting away to a poor start and colliding with another rider on the first corner. Wyman found herself 20 seconds down on the leaders and, stuck in traffic early on, could only fight her way back up to finish sixth.

“This weekend is firmly locked in the ‘to be forgotten’ box,” Helen said afterwards on her website, “and all I can say is I know the legs are good ahead of another important weekend (the defence of her European title in Germany on Saturday).”

Saturday's Koppenbergcross winner Sophie De Boer was with the leading women on the opening lap but retired after suffering an early crash.

With neither Vos nor Compton (as an American) racing, the European Championship is going to be another thrilling women’s race next weekend. 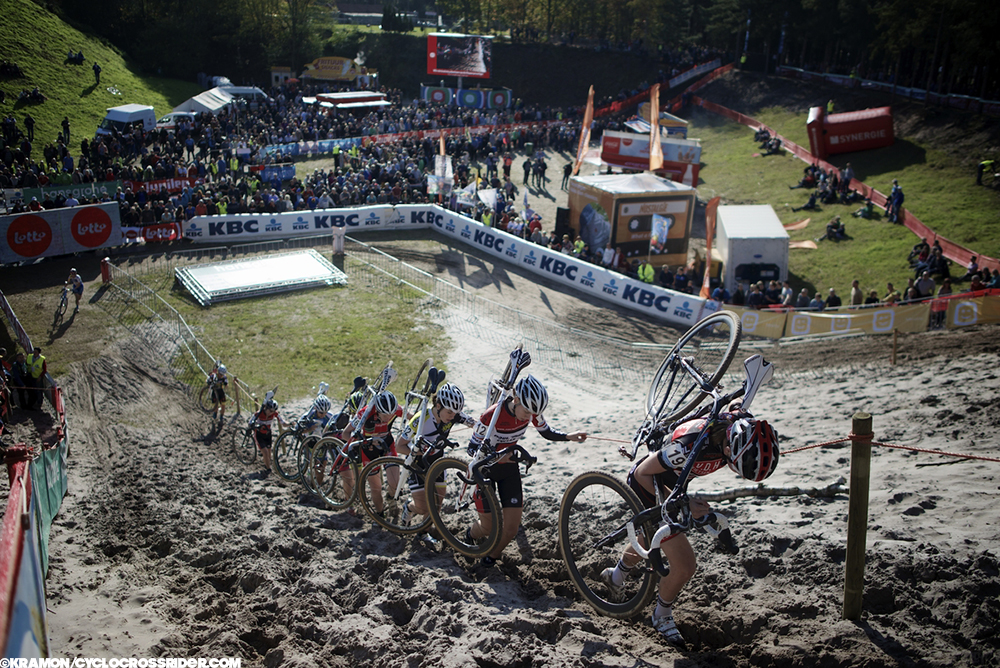 Young Briton Amira Mellor (12) is followed by compatriot Hannah Payton (32) out of the Zonhoven sand pit.